The region of Maremma lies in west-central Italy, north of Rome and south of Tuscany. Our Guzzi Falcone touring club, MOTO GUZZI CLASSICS visited Maremma during late-May / early-June in 2013. I was unable to participate in the entire tour as I was on a pre-scheduled cultural tour with two of my brothers and their wives. Knowing that we would be in Italy at the same time, I arranged the family tour so that we crossed paths with the Club for four days. During that time I drove the Club's luggage van so that the members could all remain on their wonderful motorbikes. We started our family tour at Lake Como, on to Lucca, Pisa, and Siena before heading to Lago Bolsena in the heart of Maremma. The Club was planning to stay at the preserved Castello di Santa Cristina for four nights. My family got a special deal renting a three bedroom apartment for a full week. The hosts live in this castle pictured below while the visiting guests use the nearby reconstructed stables. Breakfast is served at the castle. Fine lodging and dining in a very picturesque region. 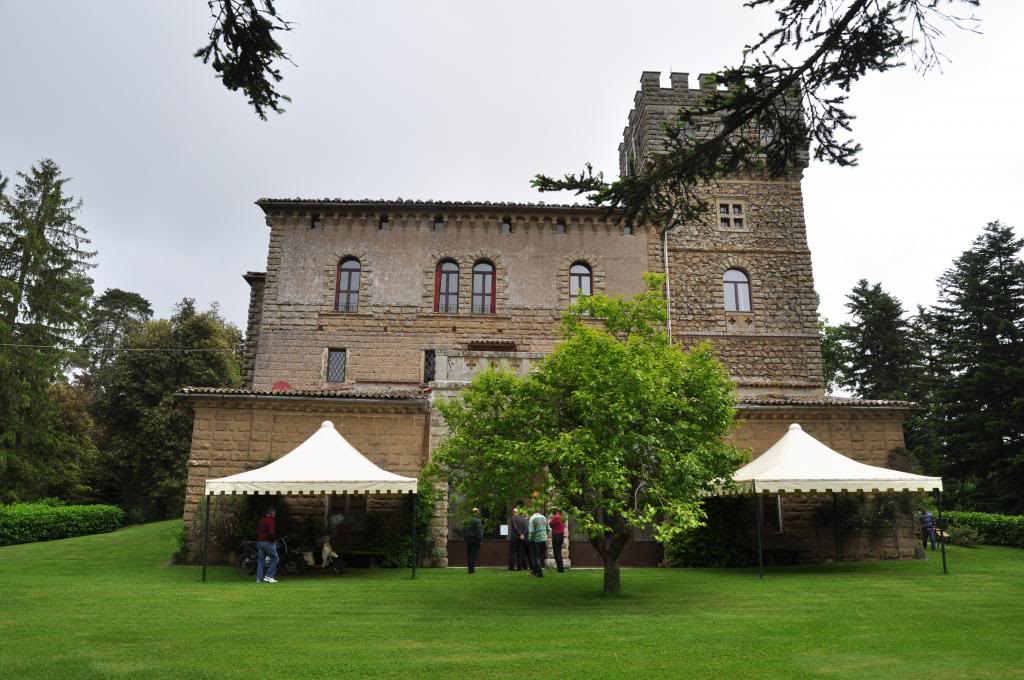 Waiting for the Club's arrival, we had time to tour on our own around the region and visit some of the smaller towns. Much nicer than the big city crowds of typical tourism. I'm always amazed at Italian intensity on preserving their historical buildings but still being capable of a very modern standard of living. 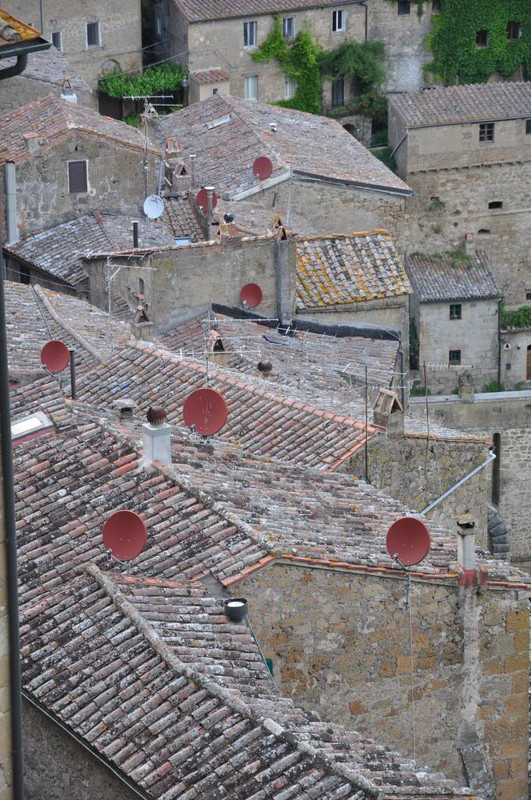 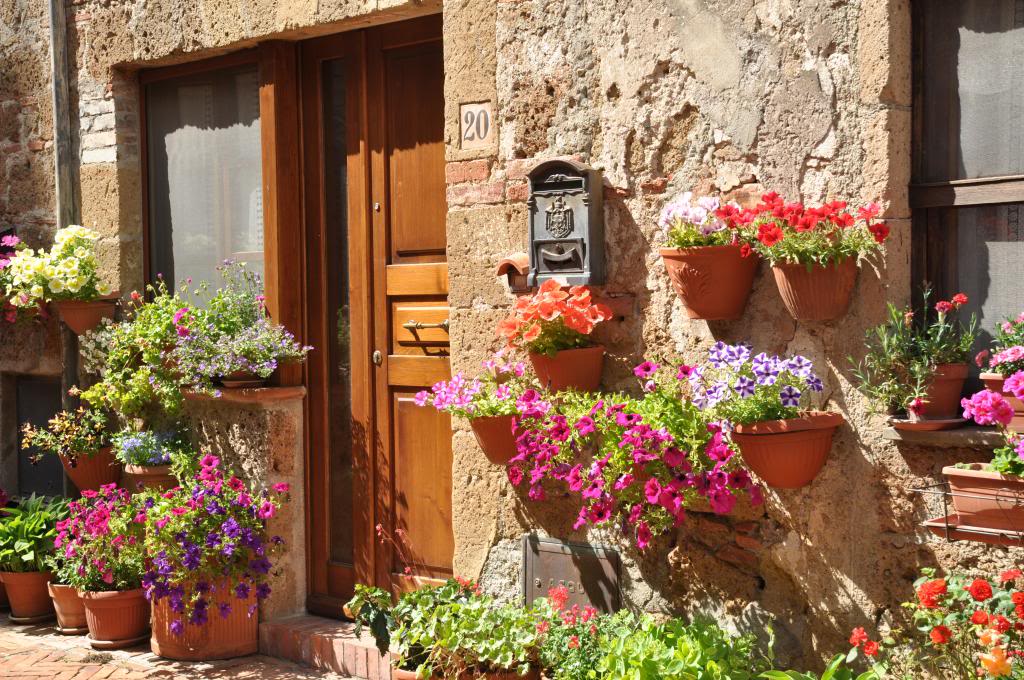 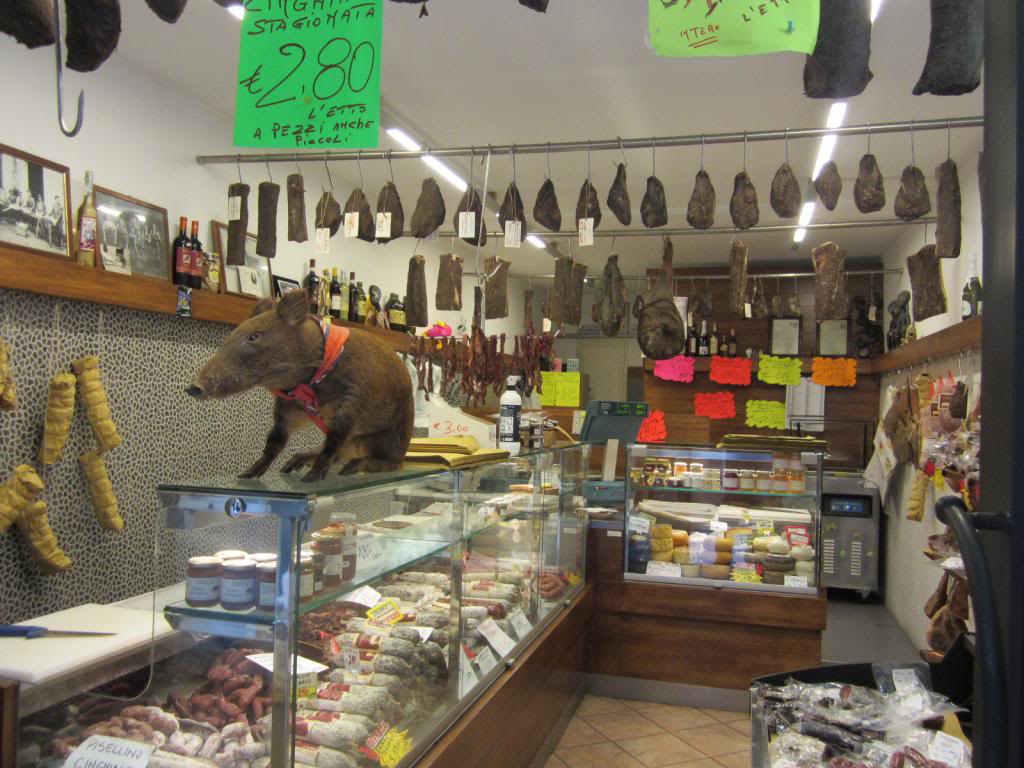 While we were driving around, we came upon a tour from a nearby National Vespa Rally. All the cars stopped and pulled over for photographs. Had to be 500 scooters on this run. 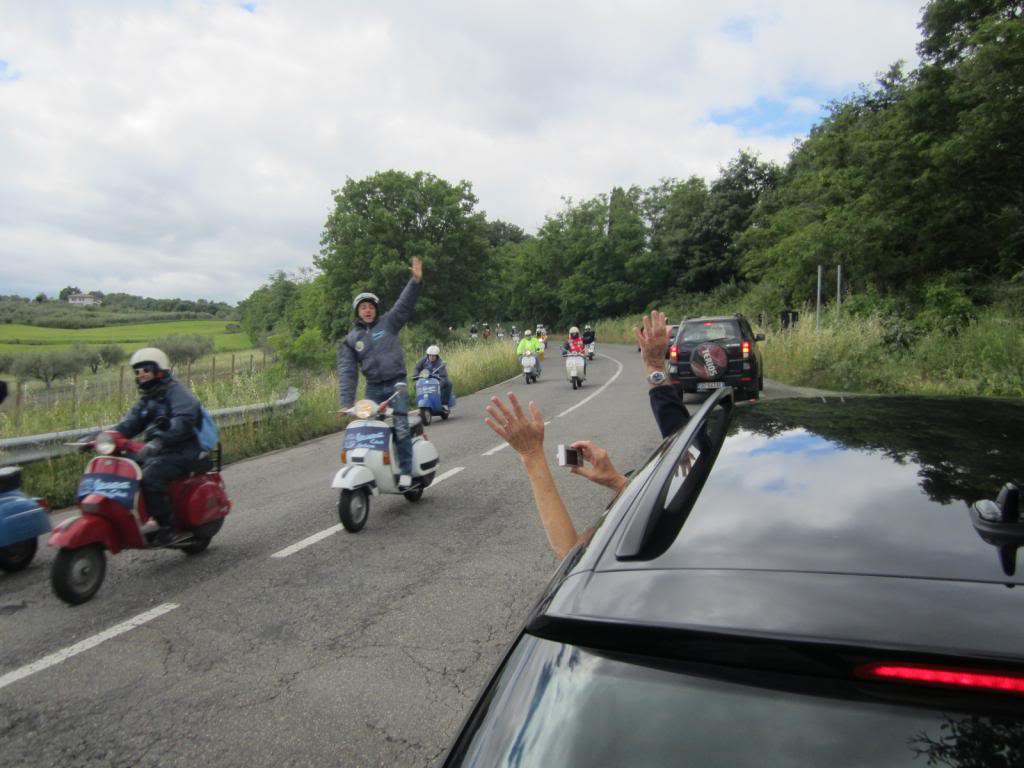 While we were touring on our own, the Club had started from Ostra in the Marche Region and were touring there before heading south. They visited the craftsmen at Soft Engine to see exotic parts and services they provide for hot-rodding the Guzzi Falcone. The Club President had his Falcone on the dynamometer putting out nearly 30 horsepower. 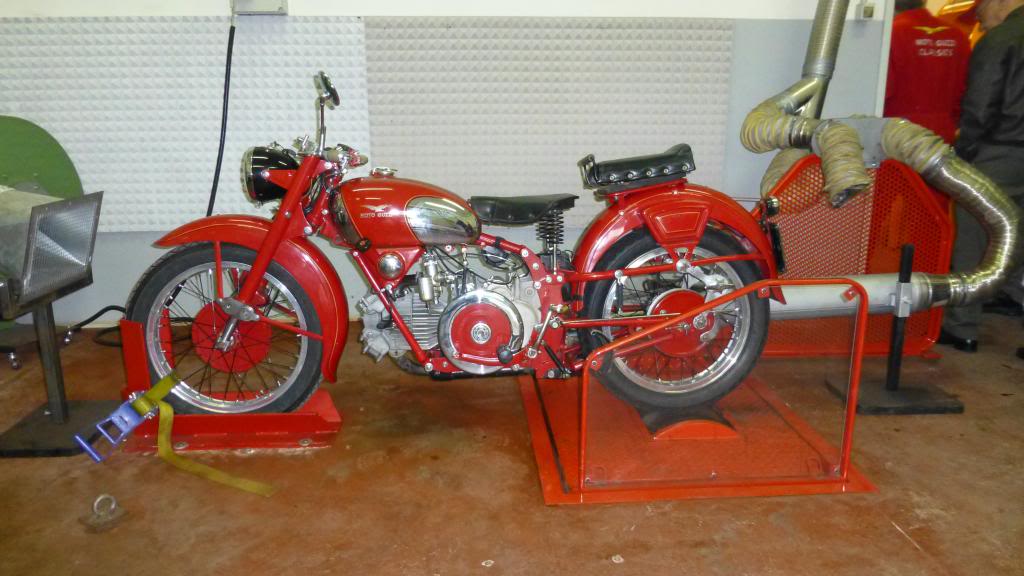 People commonly refer to these Guzzi singles as slow-beating thumpers. Play this video (YouTube Falcone Test) to see what a 'thumper' sounds like when in a high state of tune. 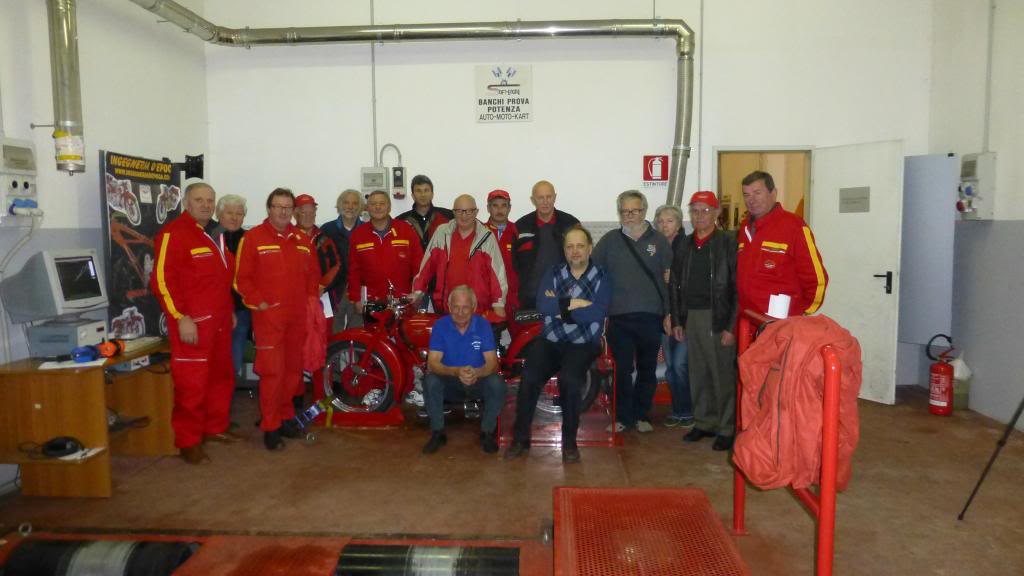 We finally arranged to cross paths and met up at a dormant quicksilver (mercury) mine and mining museum on the slopes of Monte Amiata in the town of Abbadia San Salvatore. My brothers and I arrived early (not being Italian) and awaited Club arrival. We could hear the sound of those thumpers coming up through the town but then they stopped to seek local directions to the mine. I jogged down to the town square and directed them to our reserved parking area outside the Museum's front door.

Our tour docent was a retired miner. He couldn't restrain his tears as he talked about people in the community who had suffered from mercury poisoning or had died in mining accidents. He was particularly emotional when he described the local town's relationship to the recent mining disaster and rescue in Chile. He himself had been trapped underground for thirty days awaiting rescue. 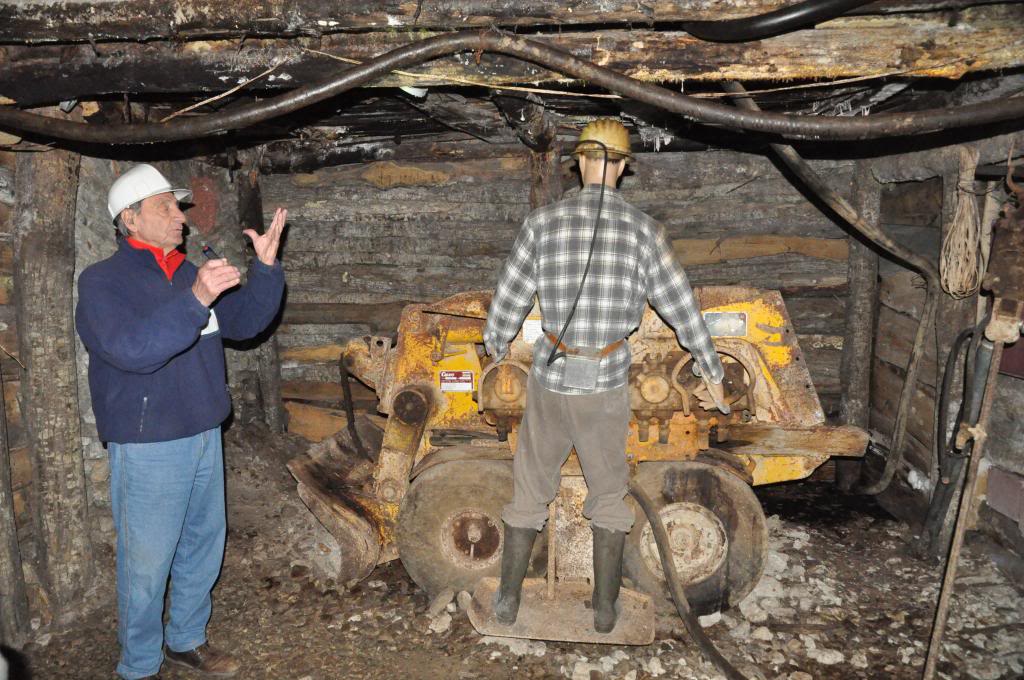 Maremma is a beautiful district. Not well known in the tourism books and not frequented by the larger hordes in nearby Rome or Tuscany. It is a feast for the eyes as you roll along the quiet, twisting back roadways. 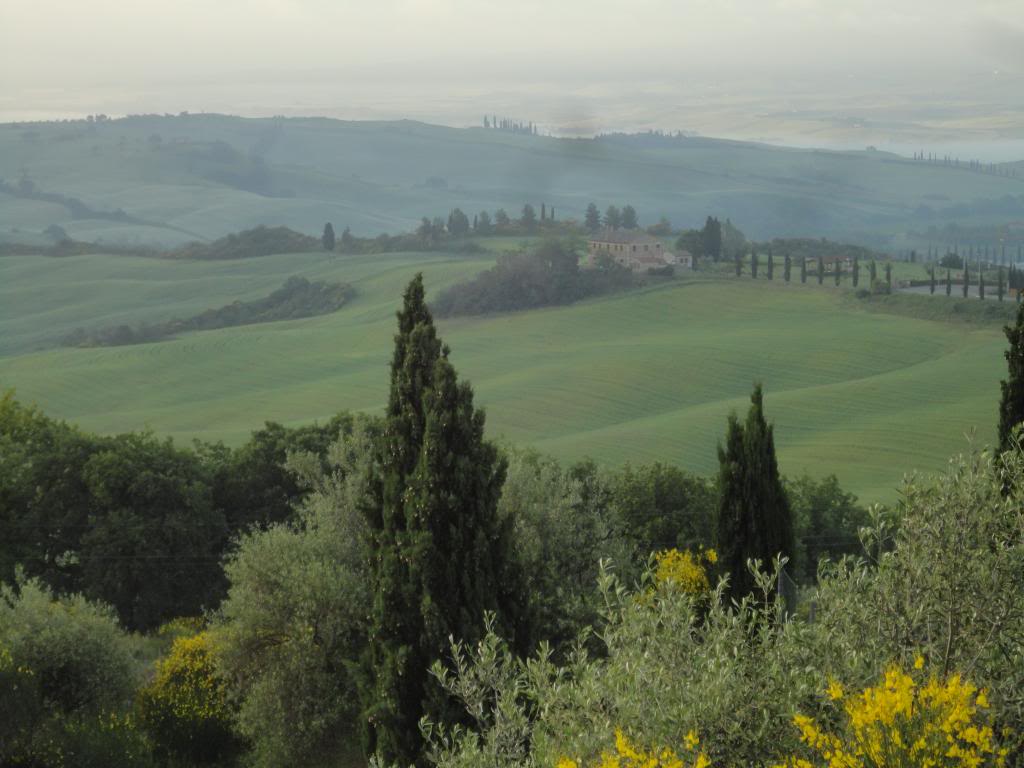 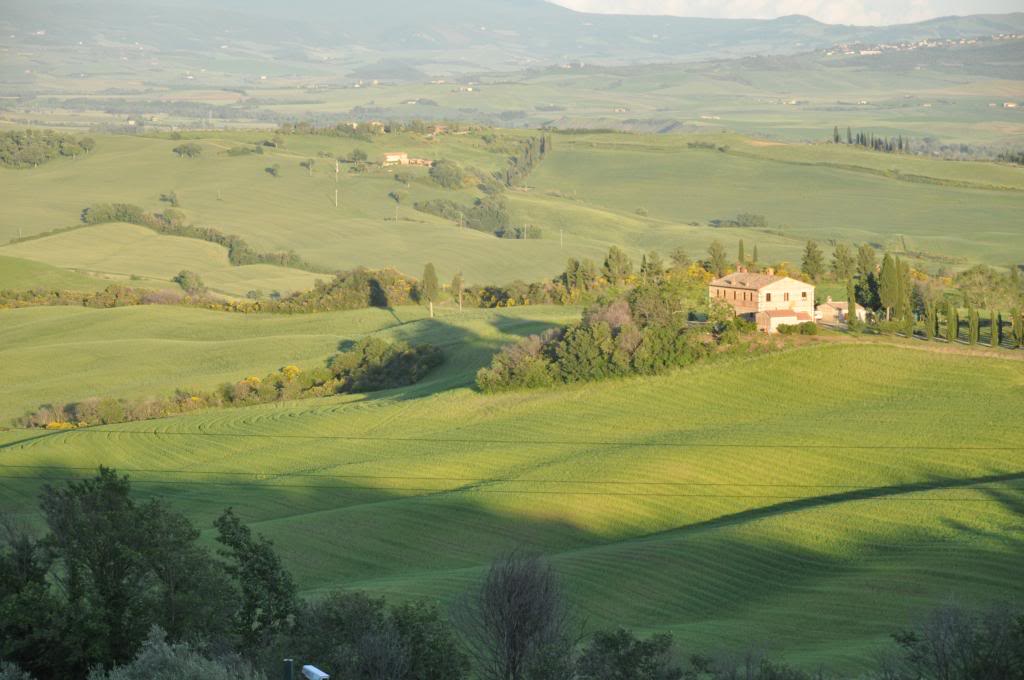 Lago Bolsena is the key geographic feature in this region. Our castle lodging was on the hillside just inland from the north shore. 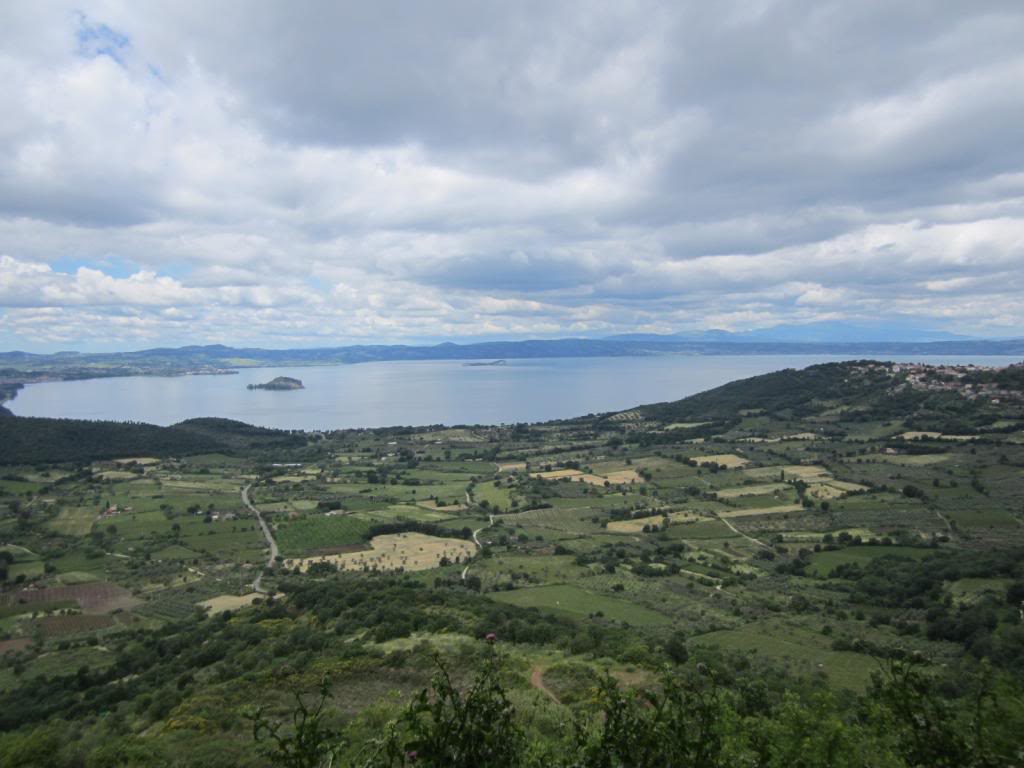 From the front view in my van, the road always looked like this! 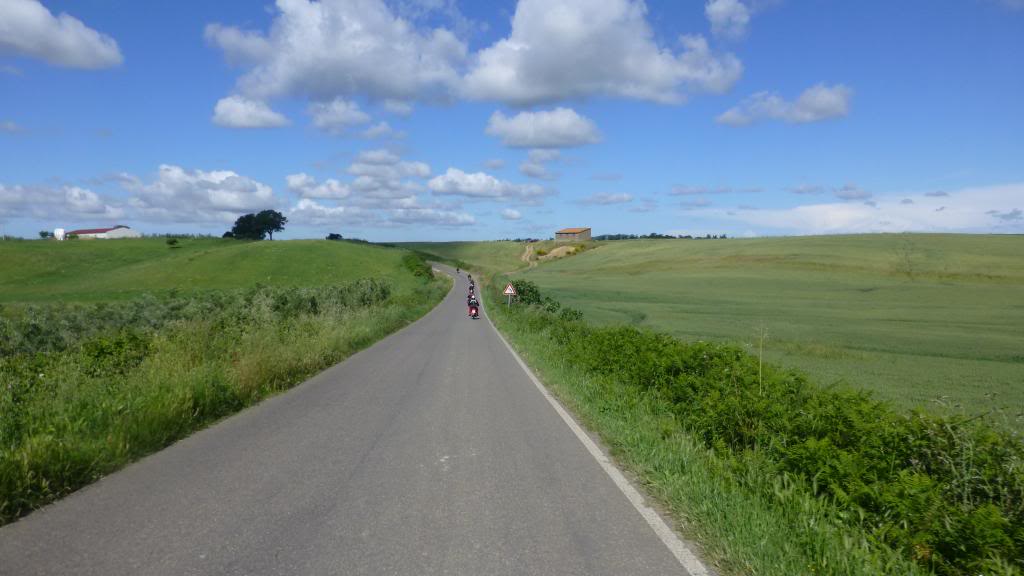 The Maremma region is most famous for its ruins and archeology relating to the Etruscan period of Italy, before the Romans. We visited a very fine Etruscan artifact museum near Vulci and Canino. 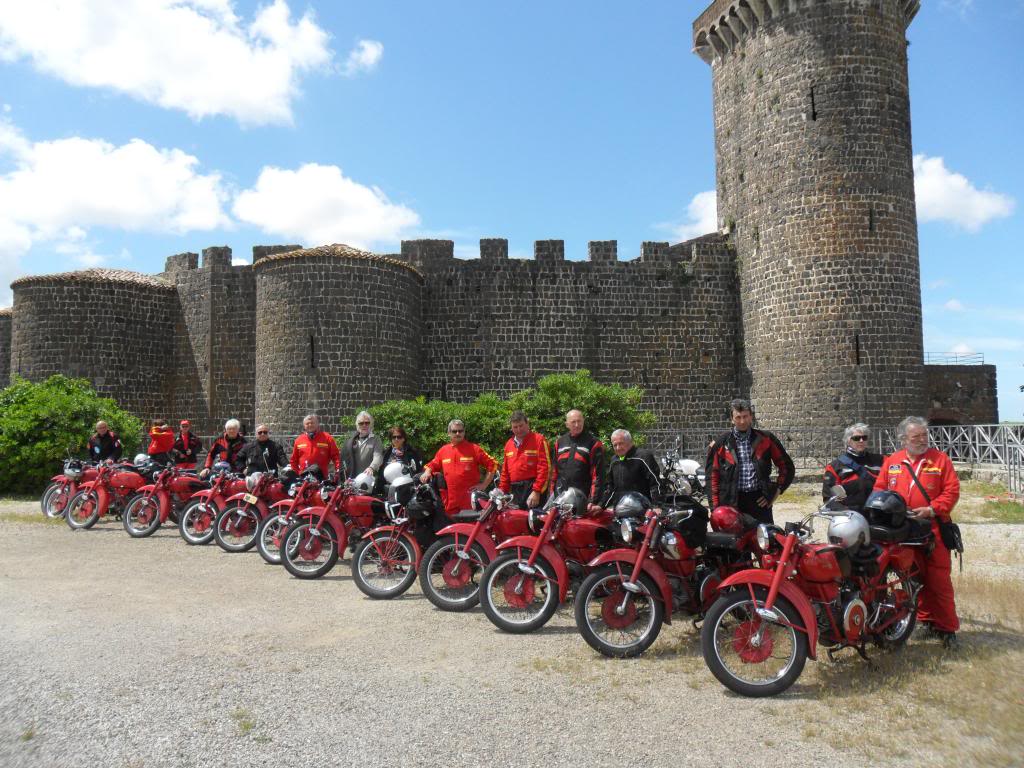 And behind discovered this later Roman bridge. 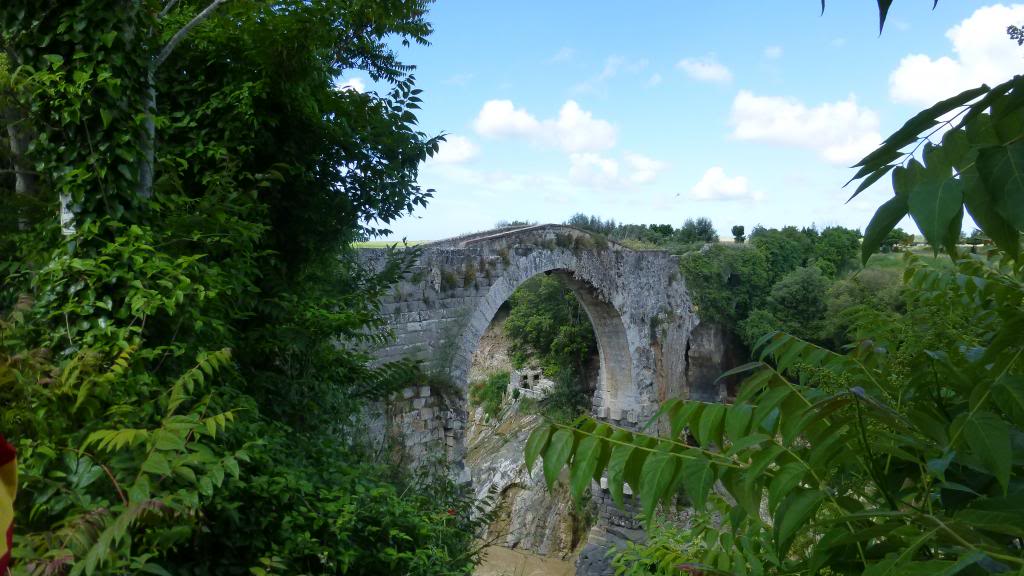 We toured the ancient city of Tuscania. We had hired a local guide to show us around and interpret historical culture. We all drove into Tuscania as a group. Except that the hired guide and the Club leadership all forgot that there was a luggage van (me) at the back of the group. We started up some narrow side roads heading for a local park to have our daily picnic lunch. I quickly became very concerned about the size of the roadway (NOT) and the size of my van. At one point I was scraping one mirror along the face of the buildings on the right while the left mirror was repetitively folding the mirrors of parked cars on my left. Seriously! I was just inching up the street, cm by cm. 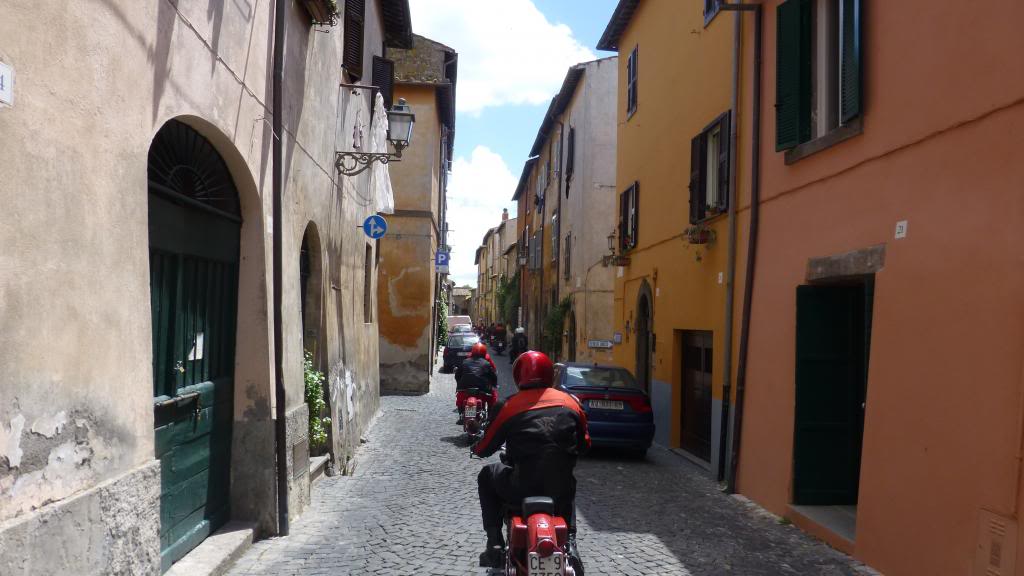 I began to realize that now the only way out was forward along the narrow road or upward via helicopter. No way I was backing down this street.

And then I saw this! 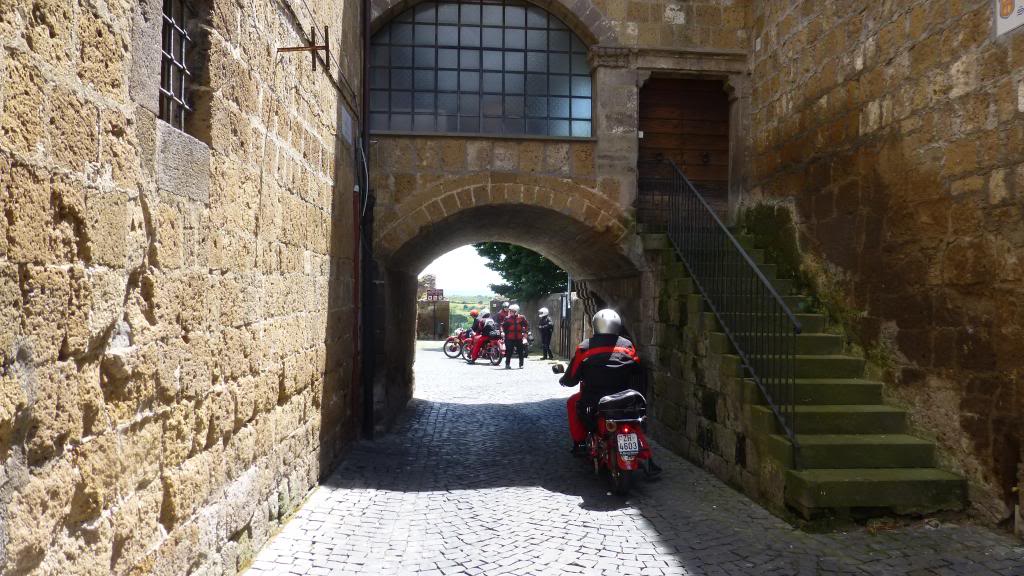 That is the van owner standing in the distance. He realizes his vehicle was likely lost forever. We cleared under by just a few millimeters.

We visited the ancient Roman thermal baths at Terme. 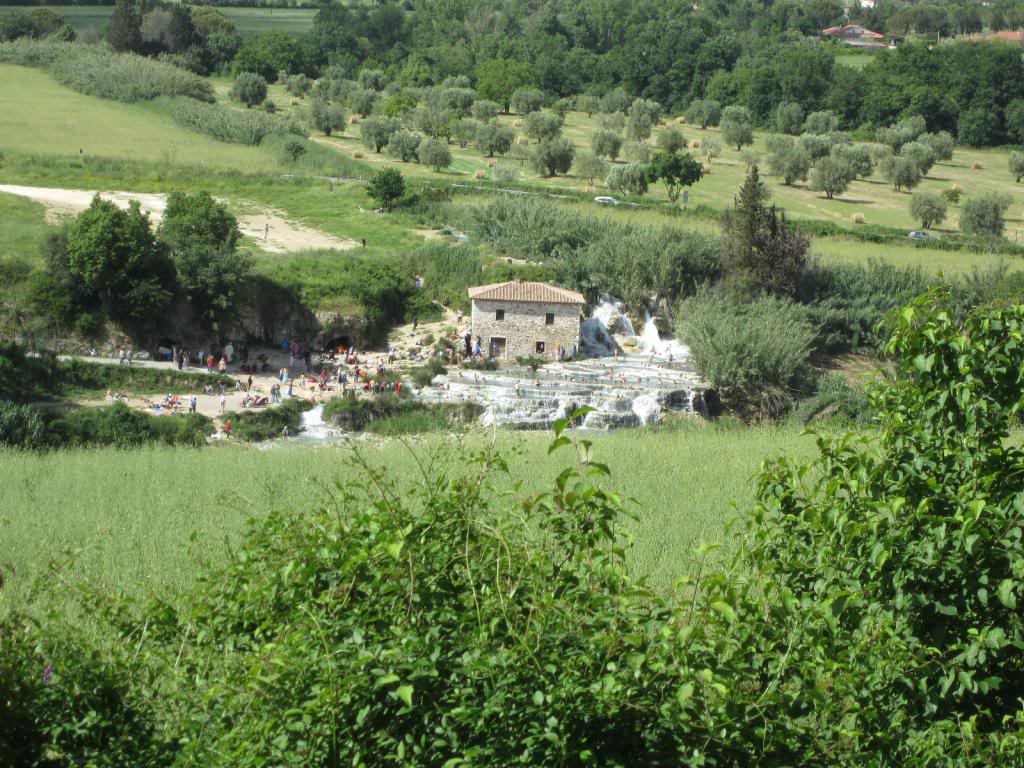 Alas, Italy does not have the same body image concepts as France. Had this been in France, all the people would be naked. 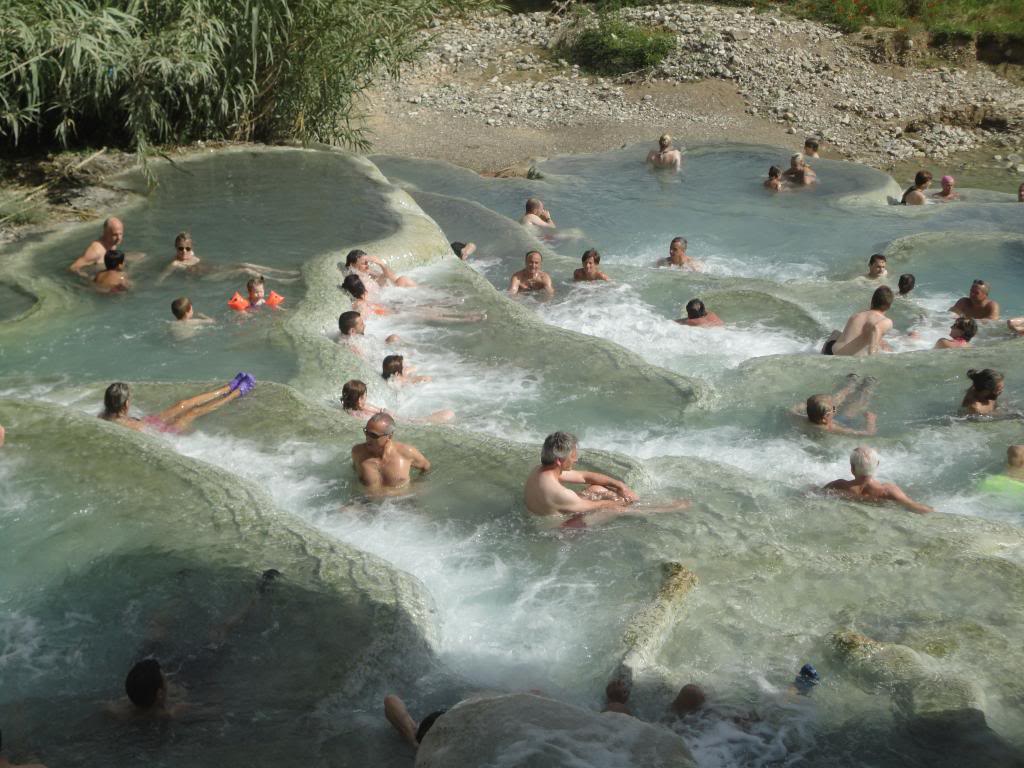 Tired of the cool and damp weather in the mountains, we headed down to the coast at Porto Santo Stefano for some sunshine. The coast here was beautiful. 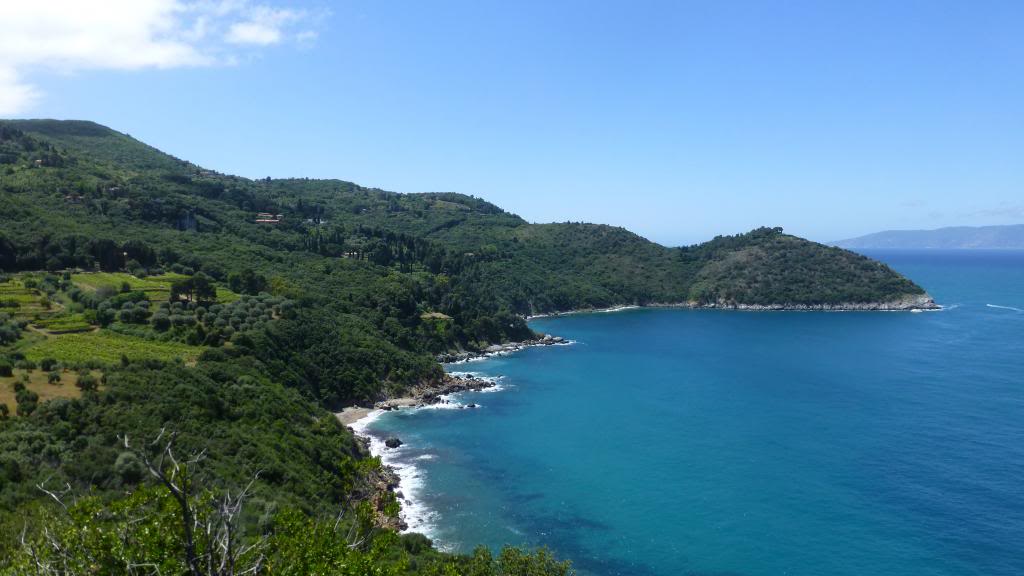 The island in the distance is Giglio. If you stare intently you can barely see the capsized hulk of the infamous Costa Concordia. 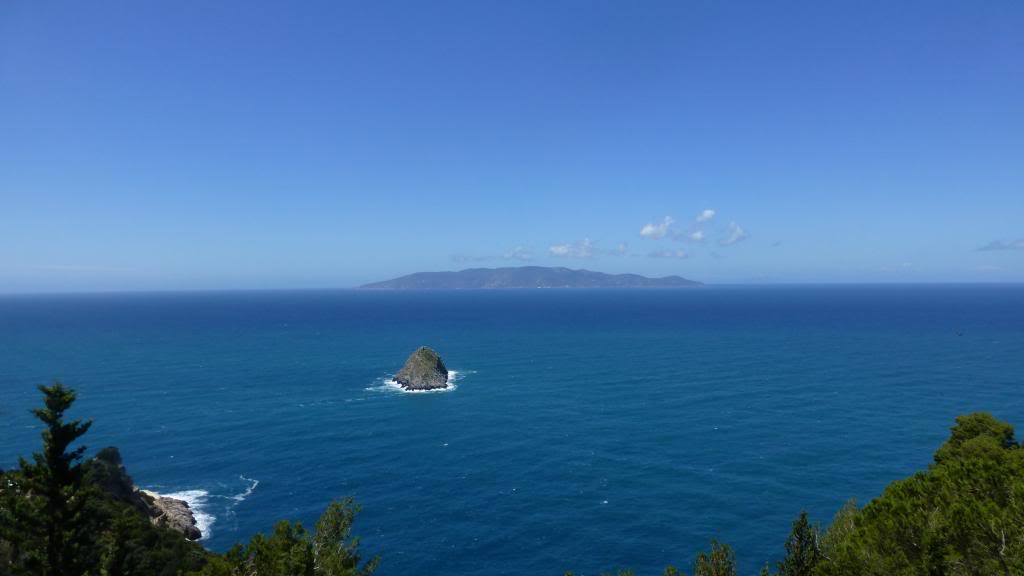 One day we visited the National Aviation Museum on Lago Bracciano. A wonderful display. Among the highlights was this Macchi MC72 which, since 1934, still holds the air speed record for a seaplane. 709.202 kph (440.677mph)! 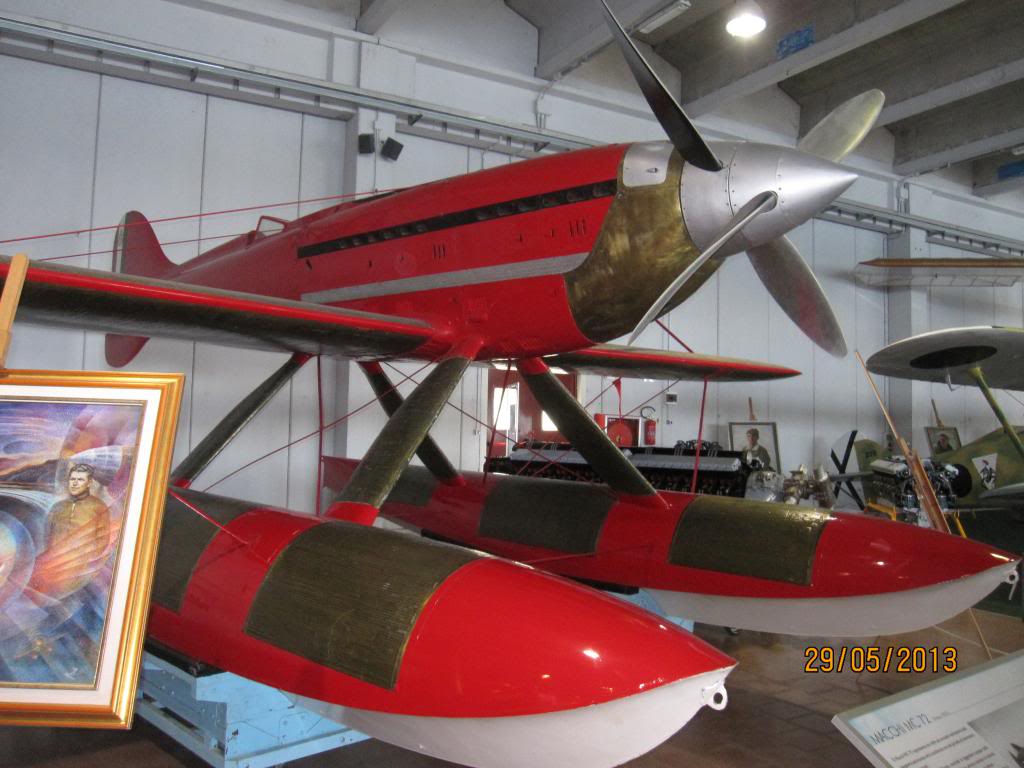 How did it get such speed? Note the dual, counter-rotating propellars. These are driven by two inline V-12 engines pushing a whopping 3000CV (2958 horsepower)! 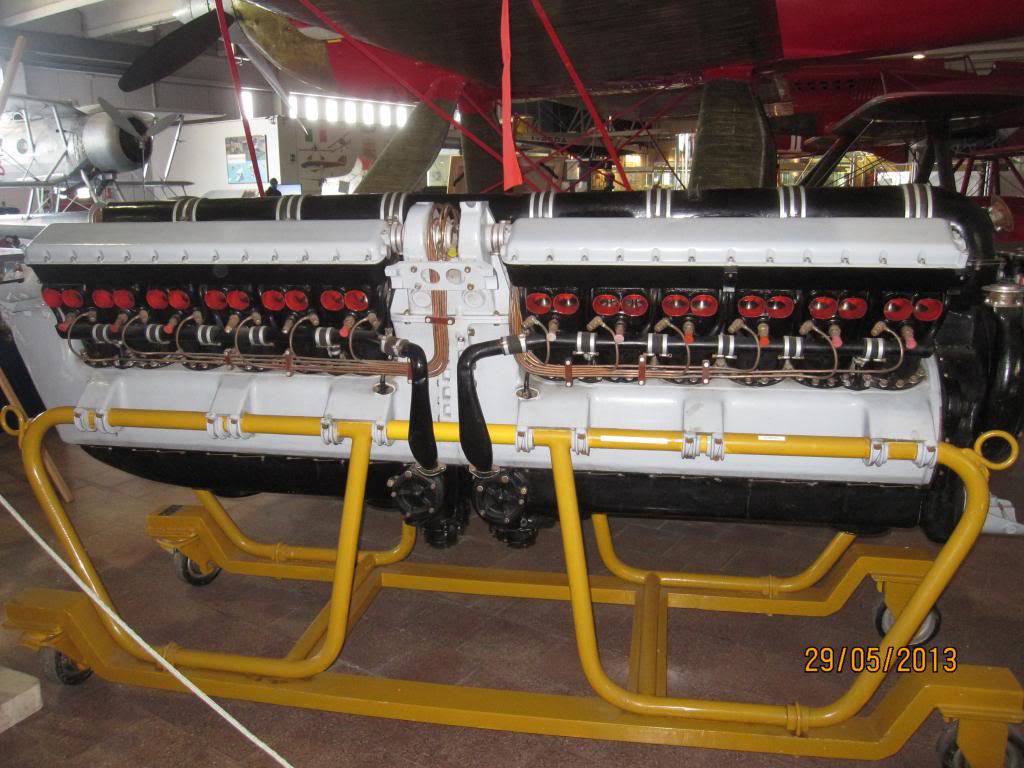 These are old motorbikes we ride. Every tour requires some minor roadside 'adjustments'. Often requiring the most exotic of specialty custom tools. Here we performed a little spark timing alteration. 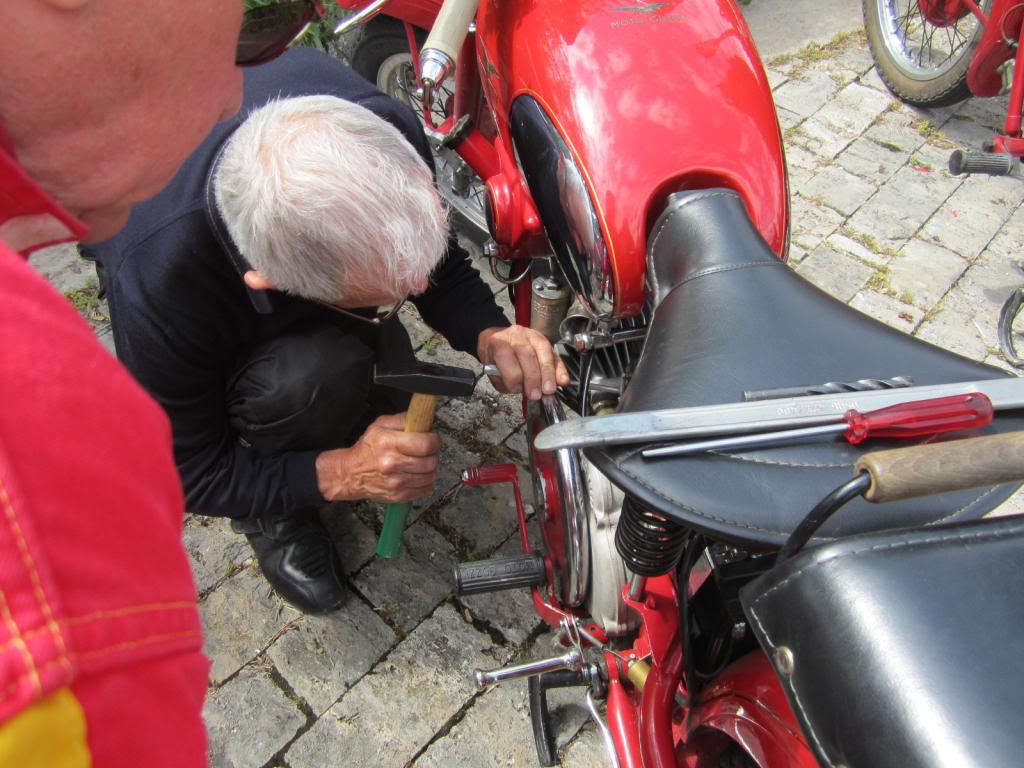 And here is the Falcone-NT of our Swiss friend Roberto Rossi. These were only produced in variants of blue or grey for the police and army. I feature this particular bike since it is the same as my own Falcone-NT which is still factory original sky blue. This example shows what can be done by a paint conversion to red and black to mimic the slightly older civilian issued bikes. This bike was two-up and flawless throughout the tour. 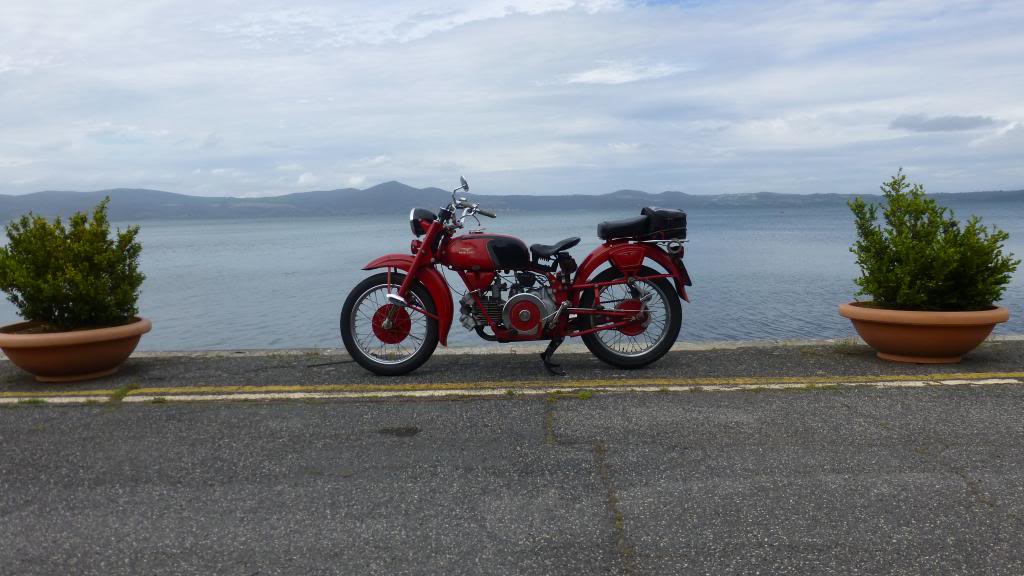 What's next? We are working diligently to plan another southwest USA tour. Perhaps in September? However, importing logistics have changed substantially since their previous visit. And the extended drought may yield a significantly diminished environmental experience. Stay tuned.